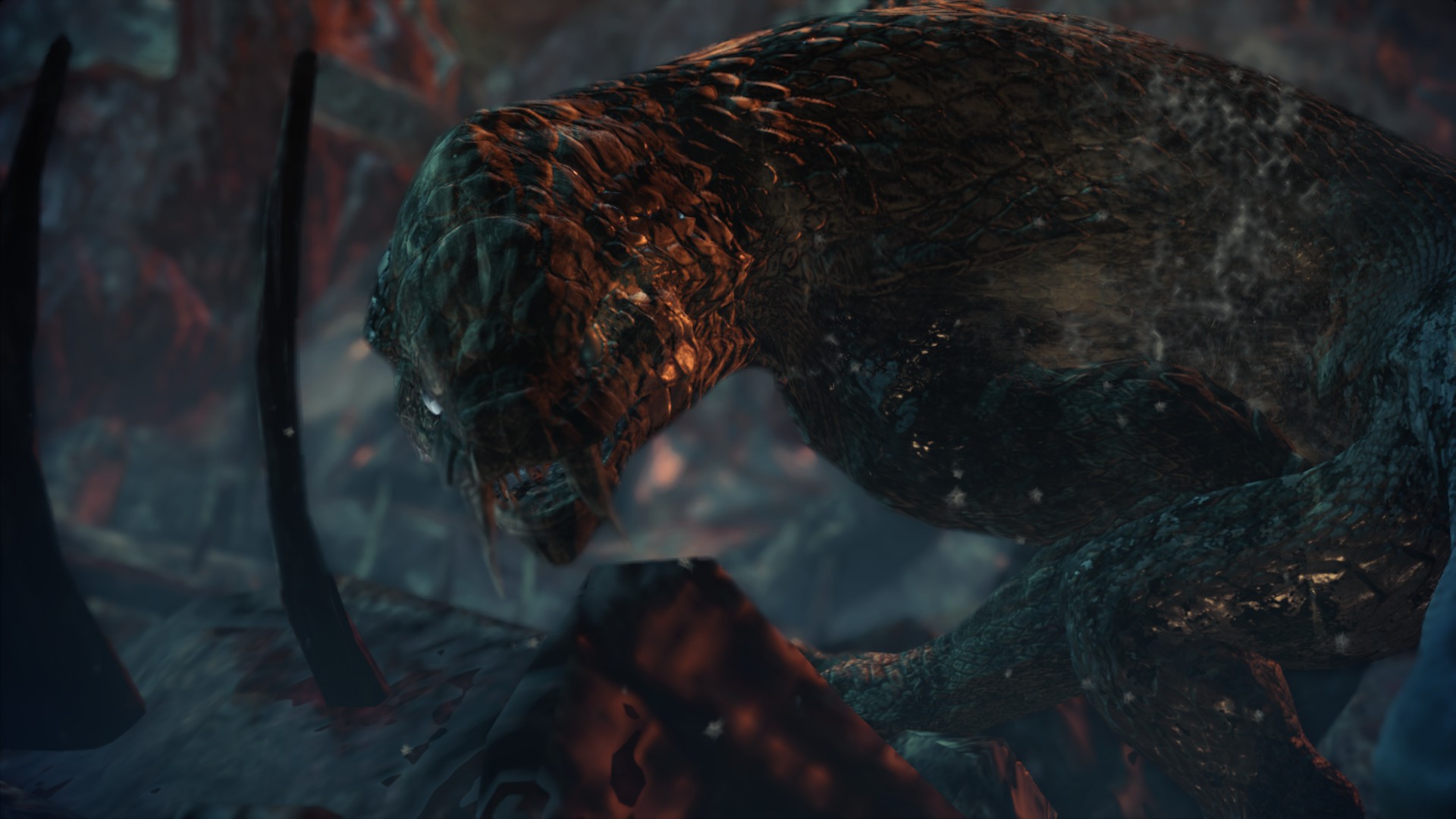 It’s been a while since I posted about the adventures in the New World but uh, I don’t have a reason why I didn’t post sooner. Mostly procrastination, I guess. Either way, last time we were hunting down the vicious Nergigante, as well as some other threats to the eco-system. However, the troubles didn’t end there as three more Elder Dragons have been sighted! Hence, we now had to deal with those.

The next three Elder Dragons were Kushala Daora, Teostra, and Vaal Hazak. I particularly was quite hyped for Vaal Hazak as all the information that I had on him lead to the assumption that it’s a Zombie-Dragon. And that’s cool. Yup. I didn’t disappointed though.

But first things first. Kushala Daora, the Dragon of Steel, could be found in the Ancient Forest but we ended up fighting it in Elder’s Recess. It is rather passive until you get close to it and hit it, so you have plenty of time to prepare even after sighting it.

While it has no Element and while it is called the Dragon of Steel, surprisingly, it actually uses wind attacks and unleashes powerful torrents upon you, making it rather hard to mount and fight it from above. I had a bit of trouble with this one until Frostilyte came over and carried me through these Elder Dragons so that I get through the base game quicker.

Now, Teostra the Infernal is a whole other story. Teostra resembles a gryphon more than an actual dragon, which I found rather cute. Teostra appears to be the male version of Lunastra, as I’ve been told, but I haven’t encountered her yet, so I’m not all that sure.

Teostra brings plenty of fire damage to the fights as well as some charge-attacks that are even more vicious then Diablo’s. Only through Frosti’s great damage output and my mounting-capabilities were we able to get through this fight.

At that point, I realised that Frosti is the true MVP of the game here as he’s just way too overpowered at this point, so I’ll probably try to Solo these Elders in the future, too. Either way… next up is…

Vaal Hazak the Hellish Fiend! It’s a rotten dragon that features a lot of black flesh and black skin. I really liked the style of this one and was excited to see the actual armour for this one!

I loved this fight so much. It was a lot easier than the other two due to nullberries being quite effective against its ailments. That’s mainly the Effluvium attacks it uses which shorten your health bar. My approach to this fight was to essentially eat a meal to get my health bar to up to +100 and to essentially use up as many nullberries as possible. At some point it even played dead to soak up Effluvium which it would shoot out through its head again, so we just kept hitting it from behind (wink wink nudge nudge) until it died. Very quick, but still quite cool!

Now, as for the armours: I honestly only liked the Vaal Hazak armour. My Palico, Tammy, looks insanely cute, especially when dyed purple, and the Vaal Hazak armour for my Hunter is alright stat-wise but looks quite cute, however… since there’s no transmog-function in this game… I won’t take it. There are better sets out there but Tammy will stay like this for sure!

Next up, we’re taking our chances against the mysterious Xeno’Jiiva, the final boss of the base game. We’ll see how that one goes!

Anyways, I hope you enjoyed this entry of the Monster Hunter Log! Until the next time…