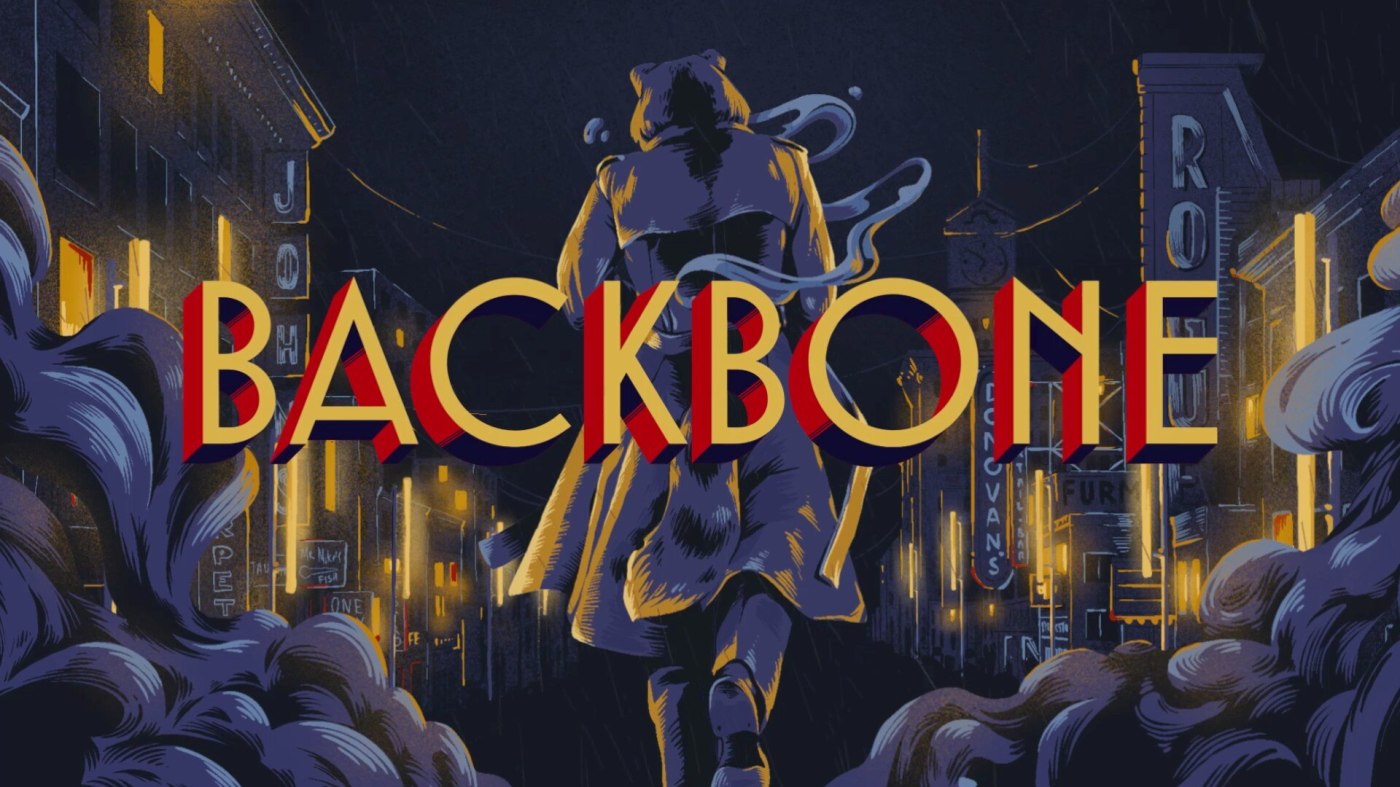 Today’s review is about a title that is different from what I thought it was. Backbone looked like a 2D Blacksad but potentially a lot better. It’s a post-noir narrative Point & Click Adventure with animals in a dystopian Vancouver, I thought,… but it’s actually quite different from that but in a good way. See, I’m not the biggest Point & Click fan. I haven’t played too many of them and I only liked a few, including The Longing. Either way, Backbone looked promising and hence, I played through it recently and really enjoyed it but it was different from what I expected as it was more of a story-driven narrative game than a mystery-solving post-noir adventure. It’s interesting how much looks can deceive but we’ll get into that later.

In Backbone, you step into the shoes of Howard Lotor, a raccoon and private investigator who’s been hired to investigate an unfaithful otter but little do you know that your small case right here is going to lead you into an even bigger mystery. Alongside friends and foes alike you explore the city, scavenging for clues and rumours and you try to find out how to get into certain places or how to get information out of people. It’s rather straightforward: Talk to people, find out things, talk to other people, apply knowledge, get information, get access. At times, you may also have to solve a puzzle or get through an area without being spotted, which is quite fitting for the snooping you do for a living. The world is interesting and you’ll have to keep an eye open for small hints and easter eggs you may find around the world. There’re even some cameos here and there which I personally found quite nice.

All of the mystery-solving gets dropped eventually though. While you find a partner after some time and try to follow a few leads early on, the game eventually drops this post-noir narrative completely and transitions into an almost Sci-Fi-esque twist that feels off and weird. Sure, I found it personally more than enjoyable and rather surprising but if I had bought the game, I probably would have regretted not getting what I expected. I’m not saying that the story is bad or anything: In fact, I actually loved the twist and was more than surprised. I really dig the idea behind it and the philosophy presented there. It’s just very different from the beginning and I’d say that the story is very much worth it if you look past the disappointing and weak ending of the series. It’s almost as if the developers ran out of ideas.

Where the developers didn’t disappoint is the puzzles in this game. One time you need to arrange stencils to get a code for a door while at another time you try to figure out the password for a missing girl’s PC. Either way, there are a lot of different puzzles that were fairly interesting and unique. I would have loved to see more of those but they sadly became a little more scarce as the game went on. Conversations also felt like a puzzle of sorts as you’re presented with a bunch of choices for your side of the convo. You can be empathic or hard-boiled, for instance, and I spend quite a while thinking about what my version of Howard would say in this situation. The options you have, the choices you can make, could very much shape the way Howard goes and… in the end,… I noticed that they don’t matter at all. This is not something that you only notice in your second playthrough, as the game actually makes you notice this in your first. At times, it felt off that characters would be introduced anew or not at all because you were supposed to meet them earlier. At times, choices you made previously don’t seem to have been made, like the brand of tea you brew or the cup you’ve chosen. It’s weird that the game doesn’t keep up this illusion of choice. Why would it have choices in there anyway if it doesn’t matter?

What didn’t disappoint me, though, was Backbone’s presentation. The world is dark and gritty at times or vibrant and lovely in other districts. The detailed pixel art and the lovely animations really made the experience A LOT better. There are small details in the world as well like raindrops hitting the “screen” and leaves moving in the wind, too. The water animations in the background and foreground are beautiful and grant depth to the 2D world while the beautiful and phenomenal soundtrack breathes more and more life into this world and can make some of the moments in the story rather emotional…

But in the end, it’s a bit tricky to judge this game. Can I recommend a game if the ending is such a letdown? Kinda? The experience overall was fun and entertaining, the mystery was interesting, and the presentation is beautiful, but the choices being there and not mattering is a letdown… and the story dropping its key narrative for a Science-Fiction twist is kind of weird, but even with the twist it’s disappointing to get *that ending*. I’m not getting into the details, again, but it’s not good. At all. Everything up to the third chapter of the game felt great. The last few acts felt rushed, though. If you’re looking for a fun and entertaining narrative adventure game, I’d still recommend Backbone, though. Just don’t get too excited about the premise and rather live in the moment as Howard lights another cigarette and as you walk through this beautiful world. The game may very much be worth it on a sale as I find the price tag to be a bit too steep for the five hours of entertainment your first playthrough provides, and the replayability just doesn’t exist unless you’re letting a friend experience it for the first time while you’re watching them.

Either way, that’s it for my review. In the end, I’m not recommending this game. Did I expect *this* when I got into Backbone? No. Not at all. It was different… It certainly was still a better game than Blacksad, I guess, story-wise, but as for the actual noir-ness of Backbone and as far as the actual mystery, it’s not as good, I guess. Maybe the comparison was flawed, to begin with, and I’ve been comparing apples to oranges or rather raccoons to cats, this whole time. Oh well,… If you wanna get Backbone, I’d recommend either playing the Prologue and leaving it at that… or grab it when it’s on sale. It’s not worth the full price, in my opinion. The fact that a lot of the nice puzzles and the sneaking passages are gone after the prologue is upsetting. The choices not making a difference is actually breaking the immersion quite badly and the fact that the end suddenly turns the game into a Sci-Fi mess is sad as the original idea, premise and setup could’ve lead to so many great resolutions.