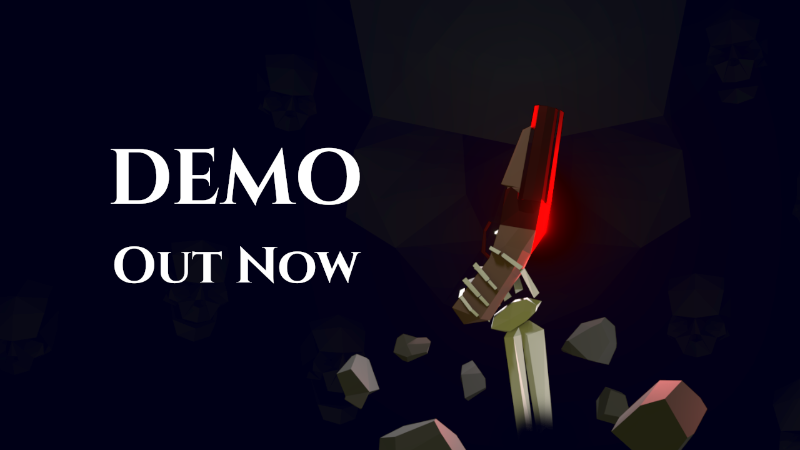 So, for today’s post, I actually have a very neat little game in store. The demo launched a while ago, actually, and that’s a shame as it’s honestly quite well made. ENCHAIN is a mix of fast-paced platforming with bone-breaking FPS action as well as some hack and slay and souls-mechanics! Now, this sounds like a wild mix but it’s amazing.

So, in ENCHAIN, you play as an Undead being that is thrown into this dark and mystical world. Your only weapons are an arsenal of guns that you unlock as you play the game and a lantern that you use to grapple, throw and gib your fellow undead while also navigating.

Using your right mouse button, you can throw your lantern at things and enemies and smash a skele-TON of enemies around until they’re staggered. Once staggered, you can pull them in and smash them against walls to break them apart. Enemies will regain health when left unattended, so smashing them is the only way to actually destroy them. When you do that, you earn souls that can be used to heal yourself or to convert enemies into yellow enemies that then drop bullets for your guns when destroyed.

While the controls may feel a bit hard to get used to with wall-glides, slides, dive jumps, grapple mechanics, and lots of other things that you can do to navigate the world, it is incredibly fun to do so once you master it all. In this sense, a better tutorial could be cool but at the same time, I feel like the challenging aspect of learning your move set is what makes this game so fun.

The guns feel good. I unlocked a pistol, a shotgun and a minigun of sorts and you can use those to deal a lot of damage and at times even instantly stagger enemies. By charging the weapons, you can deal a lot of damage as well – which is often needed in challenging encounters and boss fights as you prioritise which enemy is the biggest threat and which ones can be dealt with without any bullets.

Another thing that’s great about ENCHAIN are the old-school-esque graphics that accompany you as well as the ominous and atmospheric music by Oliver Trinidad. I would have loved to hear the music more often but given that this is an early demo, I’m honestly happy with the bits I was able to hear.

Now, what I didn’t like was the gameplay loop of finding key pieces to unlock doors. Often, I’d have to backtrack and see where I missed something in this intertwined, non-linear underworld. I would love to see a map here but at the same time, I can understand that it’s a design choice that not everyone wants to implement in their games.

ENCHAIN’s demo can be played over here on Steam! Check it out for yourselves! I’m really excited about the full release of it!

This post is part of the Blaugust 2021 event. For more information on that, check out this post!

One thought on “ENCHAIN – First Impressions”