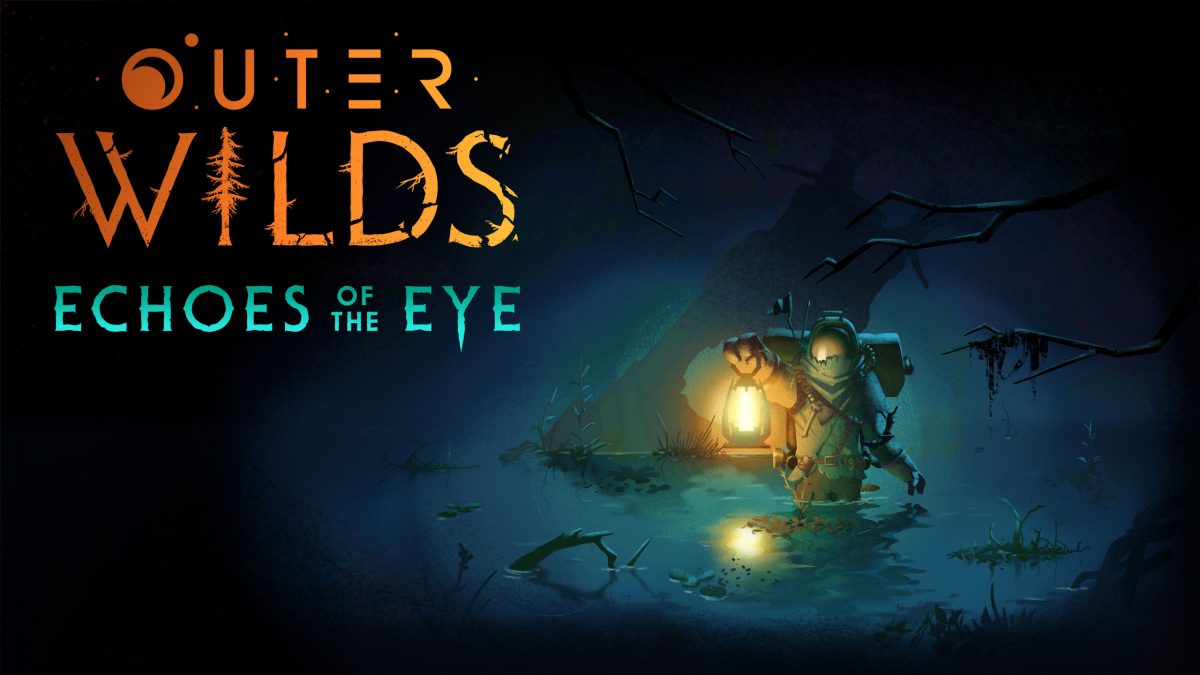 Outer Wilds‘ DLC “Echoes of the Universe” is releasing tomorrow and I’m incredibly excited as it seems to embrace a dark and gloomy new location that appeared in the universe! Hence, today I wanted to talk about my theories around it as well as some spoilers that I already know about because of several sources. Naturally, most of my theories are based on speculation and it’s not confirmed or anything… Still, there may be spoilers, especially the deeper we get into the post! If you haven’t checked out Outer Wilds yet, definitely buy it and play it first. It’s amazing. Here’s my review! As far as the structure of the post goes: The beginning will be about the store page, the DLC patch, and the trailer. Then there will be another Major Spoiler Warning and I’ll talk about the leaked achievement list and my thoughts on that stuff.

Anyway, from the Store Page we know that there is a new radio tower on Timber Hearth as well as a new satellite at the edge of the universe providing mapping for your ship. That satellite can be seen in the opening shot of the trailer while Outer Wilds Venture’s hymn plays. As the camera pans over to the universe, something strange happens, though: The beautiful music turns into an ear-numbing bass-like sound while the sun darkens, seemingly. This creepy sight is then getting interrupted by shots of the DLC’s content. The sun isn’t vanishing, though! Since you can’t see any stars behind it, we can assume that something is covering it up and essentially removing the little light you have left on your planet. That is probably also why the DLC’s store page tells you to grab your flashlight and prepare to illuminate the darkest secrets of the Outer Wilds… Quite literally, it’s gonna get dark here! The next shot from a different place shows an icon of sorts that portrays the Nomai’s depictions of the Eye of the Universe at the end of a dark hallway. Judging from the pillar-like shapes at the hallway’s sides, I’d imagine that this is placed in a ruin of sorts and not exactly in any known building that we’ve seen so far. Next up, there is a cave system of sorts that we’re venturing deeper into. Judging from the look of it, this doesn’t seem like anything we’ve seen so far. The only idea that would pop into my mind would be that this is a place within Dark Bramble (Quoting from the Store Page: “What lurks in the heart of the ominous Dark Bramble?”) based on the rocks’ colour… Or within Timber Hearth’s moon or even a completely new location. Next up in the trailer, we see a storage room of sorts with dark wood and strange camera or mask-like shapes on the wall. The room is completely dark usually but your scout illuminates it as you move shoot it out and place it on the wall. The next shot shows an elevator moving down a deep hole, potentially into that cave system we’ve seen earlier… Next up, we see an outside shot of a dark building, again with pillars, which looks like the new building we saw earlier as well. In the next shot, there’s a totem of sorts, unlike we’ve ever seen in the universe, that looks like a hand with an eye in the middle of it, deep inside some dark woods. Then, there’s a bridge that is falling down – but what’s more interesting here is that there are some lighter buildings in the walls, one of which looks like a church, almost? Then there’s a mechanism that works with green lights and resembles the airlocks in the Nomai stations but it isn’t quite the same. Next up, a bell, followed by another totem. And at last, the sun is swallowed up, and the title shows.

Now, from this point onwards, there will be MAJOR SPOILERS!!! You’ve been warned! Don’t proceed.

The new patch’s changelog revealed that the traveller’s instruments are now “affected by a certain event”, and I thought that’s referencing the new DLC content but uh, apparently not as can be seen over here. There will also be a new building and another campsite on Timber Hearth as well as a future exhibit in the observatory museum that is “under construction” if you don’t have the DLC, I guess, which is a clever thing that makes the transition from base content to DLC content almost seamless. The “doze off” ability is now unlocked as well after getting the launch codes, meaning that you could potentially use that to “dream” in Outer Wilds. One of the new achievements, after all, is referencing “be woken up from a dream five different ways in a single loop”. That confirms that the DLC content and the base content are intertwined in a way. The new planet/location known as “The Stranger” is essentially going to provide content that can be accessed within the base content’s time loops. I’m looking forward to seeing if there will be a way to break the loop, as the DLC’s store page is referencing exactly that… Another thing we know through the leaked achievement list is that there will be three “Forbidden Archives” that can be reached in the game. The dark buildings we saw with the storage units and those bright things are probably those “Forbidden Archives” that are being referenced here. Another thing that the “Ghost in the Machine” achievement is referencing is “without getting caught” which plays a lot into the hands of the achievements referencing “pursuers”. There are also “artefacts” that can be used and that have different effects as well as potentially a third race known as the pursuers or a race that the pursuers belong to. Either way, we know that the number “3” is quite important with a lot of the symbolism seen in the trailer. More than that, there is this totem with three shapes on it that looks like it has one shape with waves being sent around in circles, another with two shapes sending waves towards each other, and the third shape with three shapes. There are three artefacts and three Forbidden Libraries. I’d imagine that each Forbidden Library features one of those artefacts. Each artefact is needed for one of those shapes. The pursuers try to break your bone by stopping you. The game is gonna be quite scary, probably because of the pursuers, which is why there is an option to make the game less scary… and then there’s also another thing: Using the three artefacts, we can uncover secrets about the universe, resulting in us potentially breaking out of the loop and maybe even saving the universe! Also, the Stranger has an artificial sun that we can shoot our probe into and there is a raft that we can use to navigate around the Stranger, meaning that there will be a lot of water, a wave, and a dark forest on this planet with caves and even some buildings. The Stranger seems like an incredibly interesting planet combining lots of water and lots of forests… which is very much unlike any other planet in Outer Wilds.

The DLC looks promising and there is still a lot that I do not know. Console players already have the patch available… I don’t since the patch will be up for PC on Tuesday morning… Hence, I didn’t get to explore the new object that is orbiting the Eye of the Universe and I didn’t get to see the new radio station on Timber Hearth or the “Hearthian Deep Space Satellite” in the solar system quite yet… But I’m looking forward to catching those for sure once the patch is here… and once I’ve played through the DLC and once I’ve reviewed it, there will probably be another post with what was true and what I got completely wrong! :) Do you have any theories or ideas? Let me know about them!