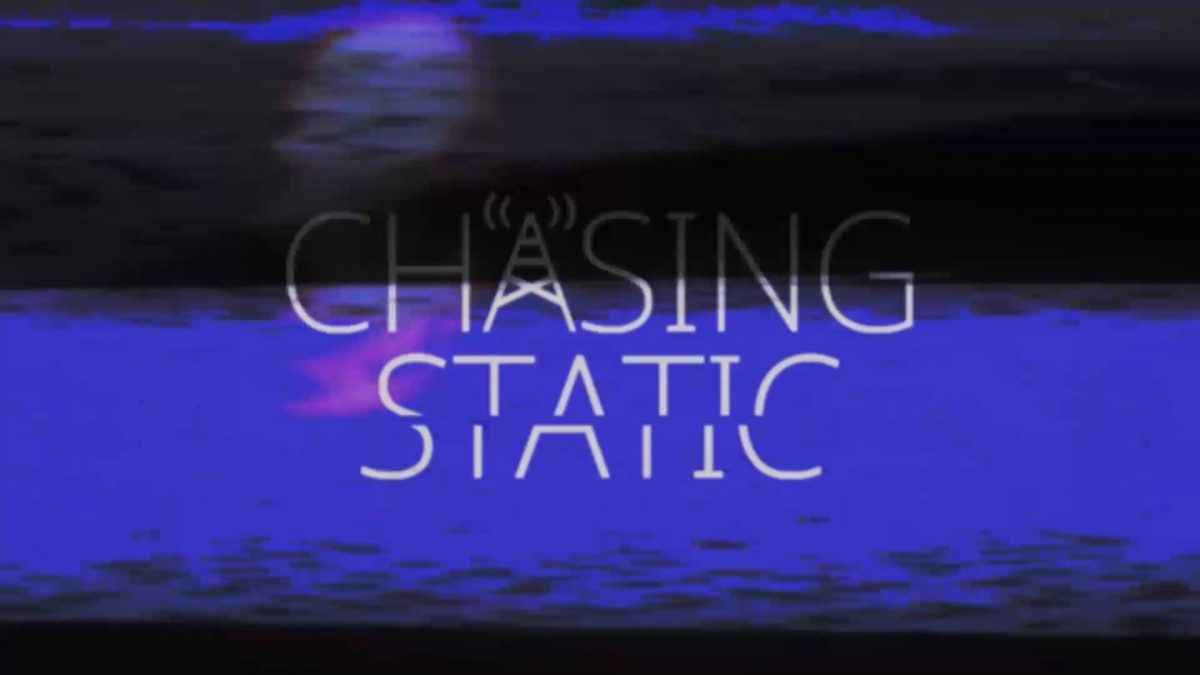 When it comes to Horror, I do enjoy it quite a bit. I like the feeling of slight shivers going down my spine and getting a tad terrified. However, I’m too scared to play the “normal” horror games you see nowadays with all the jump-scares, gore and chase sequences. It’s just too terrifying for me, especially as it feels a bit “cheap” and unfair to place the player in a room and let muppets screech at them for several hours. Sure, jump-scares can be well done… but I enjoy more atmospheric and psychological Horror a lot more – like in Chasing Static.

Chasing Static puts you into the shoes of Chris Selwood, a young man driving through Northern Wales right as a severe storm rages. Seeking refuge in a roadside café, he’s experiencing a horrific sight as he finds the café waitress pinned to the ceiling by something with fierce, glowing eyes, passing out in the process and waking up to the dusty old remains of the café. Trapped in an ominous place, you have to explore the untouched wilderness of rural Wales as you uncover a mysterious facility and try to understand what happened to the missing villagers of Hearth.

Inspired by PS1-era horror titles, Chasing Static is replicating that low-polygon look, creating a nostalgic feeling in the process. Despite the crunchy visuals, though, the gameplay combines old elements with new mechanics. Everyone knows the old formula of picking up key items and using them in other places. This game adds “Sonic Exploration” to that where you chase after the scary stuff using sound. The audio-driven gameplay centres around the experimental Frequency Displacement Monitoring Device, after all. The FDMD lets you pick up frequencies to pursue memories to piece together what exactly transpired in Hearth, Wales. There’s a lot to unpack here with plenty of cutscenes and notes to be found, giving you a lot of material to theory-craft… and the way the story is told through the sonic exploration and said cutscenes feels fresh and new. It’s an interesting mechanic that I think I haven’t seen before in games and I found it deeply intriguing to explore the forest, houses, and even an underground facility using this device.

Despite its shorter playtime of about two to three hours, Chasing Static has a lot to offer and creates an amazing experience, especially because of the audio design. The voice acting was amazing, especially due to some of the cast’s accents that were fitting and worked really well for the game and the location. Rosie Turner’s roles probably were my highlight! On top of that, the constant enigmatic humming, mixed with the rain sounds, created a tense atmosphere without having to rely on spooky music at all. Instead of triggering me with cheap jump scares and enemies everywhere, I felt increasingly paranoid in the game because I was left alone. “Am I being followed? Did I hear a sound? Is something over there?” – I asked myself these questions, second-guessing myself and questioning where the game would take me next and what exactly is going on. The core gameplay mechanic of listening in on those distant frequencies created a sense of control while also adding to the tension, which was very well executed. By activating it, you essentially blend out a lot of the other sounds in the environment and can focus on the static and other sounds that come from certain directions. You may even hear distant voices and choose to follow those but because of the non-linear approach to level design, that allows you to visit different sites in any order, and because of this device you’re free to explore the game at your own pace and proceed once you truly feel ready for it, which is very pleasant.

Chasing Static is scary. You’re left alone in this creepy place and knowing that there’s something dark and frightening out there, you still have to venture out and essentially put yourself in harm’s way. There are two or three moments that I found a bit unsettling. Nevertheless, this game is mild compared to other games. Yes, depictions of mild violence, gore and characters in distress can still be terrifying and triggering for some people but I enjoyed the way that exactly those were used in the game and how it made me jump by setting up suspense more elaborately beforehand.

What I didn’t like was the lack of direction. You’re told to go to these three sites but I found it a bit troubling to get into the game at first, once I realised that there is no map or anything to orient yourself with. I have a very bad sense of direction and ended up walking in circles multiple times in one place before actually finding a signal and before eventually knowing where to go… Because of how contained the areas are, though, it didn’t matter too much. You may wander around a little bit but you will still find your way through the game – and because you can sprint continually, the way to the right track is not that annoying either. And because the game lets you know that there are key items still in the area that you didn’t grab yet, you don’t risk missing something completely and getting stuck somewhere.

Another thing I’d have to nitpick is the lack of usefulness for the lighter and the torch. Yes, they illuminate the area a bit more, I guess, but I ended up running around a lot with the Frequency Displacement Monitoring Device in hand… and it took away from the experience because it also emits light and I didn’t have to use the lighter or the torch to brighten up areas. But I guess if you were to pick up the game yourself, you could just choose to turn off the FDMD when you didn’t need it to enhance your experience a little.

Overall, Chasing Static is an interesting title that combines an intriguing story with stellar voice acting, sound design and audio-oriented gameplay. It’s great how well-executed those elements are and I found the plot frankly fascinating. It is on the shorter end but caused a few very serious scares over here. Perfect for the upcoming scary season!

One thought on “Indietail – Chasing Static”