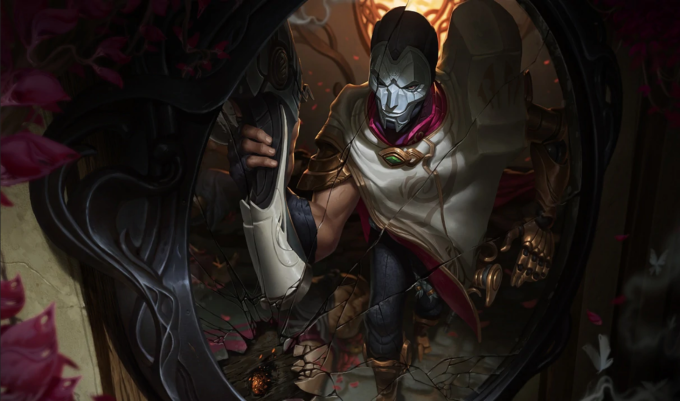 I know I said that I won’t play League again for a while… but I still like the game and Ranked is just frustrating, so I’ll get back into normal games. Initially, I felt as if normal games were as frustrating as ranked games, so I ended up only playing ranked for a while. Since people are never trying in ranked… and since they always do in normals… I figured I may as well play off-role in normal games with occasional support game.

Alas, I’ve been practising Jhin a lot since he used to be my favourite ADC and he essentially still is. My other three ADCs of Choice were Caitlyn, Jinx and Ashe, but I didn’t have a chance to play those yet. I’d like to get better at the other roles since there are a lot of cool themes in the jungle, the mid lane and the top lane but for now, I’ll just practise some ADCs… and since I love him so much, this post is about Jhin.

My favourite thing about Jhin is most likely this theme of the tortured artist that is going mad in search of his magnum opus. Jhin’s a bit of a serial killer if I remember the lore correctly trying to create the perfect murder of sorts and orchestrate it to perfection. His weapon of choice is a revolver with only four shots. Jhin’s obsessed with the number 4. His name, Jhin, has four letters. Four in Japanese is “Shi” which can also mean death. If you follow the letters J-H-I-N on your keyboard right now, you’ll see it forming a four. Forming? Fourming! The Four is everywhere. Jhin’s in your head now. But yeah, I just kind of live for that. I love it. It’s amazing. Him counting up from 1 to 4 with each shot he fires (he can only attack four times before reloading) and just the effects of his abilities make every game a lovely experience and I could never get tired of it.

On top of that, his builds are quite versatile. You can go for a lot of different mythic items like Galeforce (which is probably the best item on Jhin right now), Eclipse (which adds a bit of survivability and a lot of damage against squishies) or even Krakenslayer (which makes his 3rd shot deal as much damage as his 4th shot) and they all kind of work. You essentially go for a lot of attack damage and crit chance or lethality. Attack Speed gets turned into extra attack damage which is great, although you don’t get to reach 1000 AD like previously anymore…

Anyways, I did seven games in the last few days and had a lot of fun. I planned on making this post when there were four games with a 100% win rate but… then I postponed the post and now there are seven games. Either way, I’m still out of 7 wins out of 7 games, so that’s quite nice and my positioning doesn’t seem to be the worst. My first game was annoying as the enemy team had a super fed and super tanky Rengar that could one-shot everyone and then just run away… On top of that, the enemy Akali also did a lot of damage to me while Teemo has a blind… yup. Hence, that was a very hard game for us and rather close as well! I ended up getting to my third item and suddenly, I was useful! Despite the many deaths I had. After that game, I ended up having a great game with Eclipse (16/7/12), an okay game with only a Galeforce (forgot to buy at the end so it only shows one item… but yeah 3/1/7), and a very good game that turned into a bit of a stomp with 18/2/6 for my final stats. That game was a lot of fun, to be fair, as I ended up getting interrupted a ton of times by either the enemy Senna or the enemy Leona, so that I’ve never been able to go back and buy items. Alas, I had no mana and was staying in lane with 4k gold… but I got one kill after another and it was hilarious in a way.

The other three games turned into okay performances (ha, pun intended!). My positioning wasn’t the best and it was a bit late over here, so there’s that… What I did improve on, though, were my CS skills in the early game as well as my mana-pool as those are issues I have every now and then.

Jhin is a lot of fun and I’m looking forward to making more progress and learning him some more. I mean, I know how to play him but I’d love to get even better at it and maybe pick up some tips and tricks from people that play him a lot more than me. That’d be amazing!